You are here: Home / Reviews / Poltva by Five Spot – review 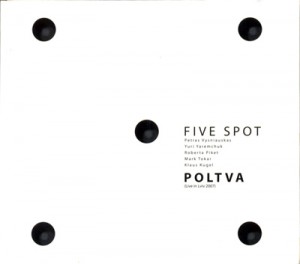 by Alex Martynov from AllAboutJazz

There is not a great number of releases from the Ukrainian free-jazz scene. Admittedly, this scene is not very crowded with performers; still, it has something worth documenting. One of the most interesting albums of 2008 is from the international quintet Five Spot and Poltva. The name of the album is symbolic: Poltva is the name of the river that flows beneath the surface of the city of Lviv, where the album was recorded a year before its release. And just as the underground river is both deep and hidden, so is Ukrainian free improvisational music.

Five Spot consists of people of different backgrounds. One of the better known ex-Soviet free-jazzers is Lithuanian Petras Vysniauskas, who now exclusively plays soprano saxophone. Russian-born (but now residing in Ukraine) reedist Yuriy Yaremchuk is the main force of the Ukrainian “new thing.” Yaremchuk’s frequent collaborator, and also a major figure in Ukrainian free music, is double-bassist Mark Tokar. The group is completed with American pianist Roberta Piket and German drummer/percussionist Klaus Kugel, who works extensively on both sides of the Atlantic.

The record is subtitled”Live in Lviv 2007, from Lviv’s Jazz Bez festival. The quintet’s work is unevenly divided over four parts: two almost half hour-long vehicles, and two shorter compositions that serve as transitioning and finishing parts.

Most of the players are long-time collaborators, thus it’s no surprise that the interplay is keen and intuitive. Not anchored too rhythmically, the reedists don’t soliloquize; rather, they find a way to complement and answer their partner’s narration or interrogation. Behind that is a quite deliberate and unsteady rhythmic base. Kugel’s open-spaced percussion or splash-like drumming creates free room upon which the horn players can expand.

On “Part I,” Vysniauskas delivers a feverish solo, showing his mastery of his instrument, working forcefully in the upper register, while Tokar’s arco bass and Piket’s eerie chords provide a variable framework. Yaremchuk reveals a looser play, employing growling and yowling before giving way to Piket’s intricate, melodic in-and-out playing. A lengthy bass solo at the end of the composition finds Tokar deftly using polyphony to the point where he sounds like he’s playing in duet with himself.

The album’s second number shows even more dissolute playing. The whole band erupts with sudden strokes, leaving the even meter far beyond, and concentrates on muscular blow-outs by both reedists. For the most of “Part III,” Vysniauskas and Yaremchuk engage in scintillating dialog, after which comes a lengthy and colorful, yet airy, solo from Piket—slightly supplemented by bass. While Kugel conveys drum layers, Petras’ soprano ecstatic howling leads to the album’s most energetic point.

The final composition summarizes the set in its point of maximal deliverance from any strict rhythmical order. Even with Kugel still playing, there is no beat to be found. The music is completely textural and layered with the quintet’s intention: creating sonic palette, rather than interweaving contrapuntal melodies.

Dear readers, the vote is on. Source:  http://www.freejazz-stef.blogspot.com Many thanks for your suggestions. I … END_OF_DOCUMENT_TOKEN_TO_BE_REPLACED 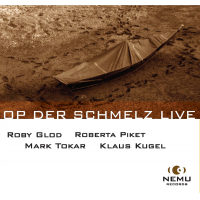