You are here: Home / Reviews / ‘Varpai’ as wonderful listening experience

I usually am not a fan of vocal improvisation, but there are exceptions. It is extremely difficult to explain why it sometimes works and why it sometimes doesn’t. I think a lot has to do with attitude and authenticity. Very often vocals in modern music come across as posture, pretense and pyrotechnix – like in lots of operas by the way – yet rarely it sounds real and unaffected, like in these two albums.

The second common aspect between both albums is their lack of concern for musical genres and styles, while at the same time respecting them – they integrate and take it a step further. Purists of either jazz or world music will not specifically like those albums for this reason, but those willing to discard conventions will surely enjoy both albums.

The trio is Klaus Kugel from Germany on percussion, Mark Tokar from Ukraine on bass, Andrė Pabarčiūtė from Lithuania on voice.

I’ve praised the qualities of both Kugel and Tokar before, with the bands “Yatoku“, and last year as the winner’s of the Happy Ears Award with “The Passion“. Both men are extremely precise instrumentalists with a shared musical vision of sculpting jazz into a more universal musical language.

Lithuanian singer Andrė Pabarčiūtė was unknown to me, but her singing qualities are astonishing. The overall atmosphere of the music is minimalist, with lots of arco bowing and light percussive effects, with an almost classical chamber music feeling. Even if unfamiliar, the music is gentle and welcoming, with no clear references but with influences from jazz, folk and classical. 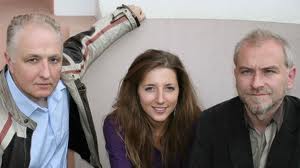 André’s worldless singing is equally light, abstract and unpredictable. She can sing like a bell, clear incantations, she can use her voice as instrument, prolonging sounds, using her throat, lips, tongue as extended techniques, resonating with the bass, screech like a bird, or add dark-toned drama and intensity.

Everything is refined and pure and open-ended and fully improvised. Like so much of minimalist music, the full attention goes to tone and shades of tones creating a common musical universe rather than three musicians playing together. The title – Varpai – means bells or chimes in Lithuanian (if I can trust the online dictionaries) and it is especially the latter that the music sounds like, like chimes moving with a common wind, bringing a coherent, light and resonating sound that is attractive without being repetitive once.

In order for the Resonance Ensemble to come to Chicago at the end of August to rehearse, record, and then perform new … END_OF_DOCUMENT_TOKEN_TO_BE_REPLACED